Volunteer days are back, in a new format! They're the second and fourth Saturdays, on a smaller scale. See our Eventbrite site at bikex.eventbrite.com for details and to RSVP. Grab your spot and join in on the wrenching for good! See the event calendar for more events and volunteer days.

Donate bicycles and parts by appointment. This email address is being protected from spambots. You need JavaScript enabled to view it. and details of what you have. We have specific drop-off times on Wednesday and Friday and other times by special arrangement. We'll let you know if we have a need for your items and get you drop-off details.

Info: This email address is being protected from spambots. You need JavaScript enabled to view it.

During the pandemic, SVBE has been largely dependent on tireless "homework bike" volunteers to keep our bike donations going.

One of the most dedicated homework bike volunteers has been Michael Khaw. Almost every week you can find Michael at SVBE unloading the bike rack on his red Mazda Miata with clean, freshly-tuned bikes that he worked on at home.

We caught up with Michael to learn more about the man behind the mask, and the volunteer behind many of the bikes we've donated.

Who is Michael Khaw?

I grew up in Burma, now Myanmar, have lived in Thailand, Massachusetts, So. Cal., and spent many summers working in Italy and a bit in France. In the Bay Area, I've lived in Palo Alto, Berkeley and briefly in San Francisco, but Sunnyvale has been home since 1983.

I was a software geek until the dotcom bust, when I switched gears to a second career organizing and leading bike tours in northern Italy, and later in southeastern France. Although I grew up with both cats and dogs as family pets, I currently don't have any.

How did you get involved with SVBE?

Friends from the Western Wheelers who volunteer at SVBE kept asking me.

What keeps you coming back?

I often learn something new about bikes and the regulars are all great people.

You’ve most likely worked on a number of different bikes. Which bike stands out as the most memorable, or your favorite?

I'll remember for a long time a homework bike I recently finished. It was a Trek road bike that appeared to need nothing more than a freshening up and a cleaning. My first ongoing mistake was forgetting that its wheels were 27", not 700C. So I went home with the wrong size tires and couldn't get them mounted. Then it turned out the fork and front wheel had to be replaced. I found a great looking aluminum one, got the crown race moved over from the old fork, but when I put the wheel on… it didn't fit because it was for a 700C wheel! OK, rinse, repeat, got the correct size fork put on, but then the original side-pull brake wouldn't reach the rim. None of the side-pulls in the parts bins fit, so I had to switch to a center-pull brake, which of course meant removing the stem to mount a cable hanger bracket. Even then, one brake pad wouldn't go quite low enough: I had to file out the slot in the brake arm. It's the bike that wouldn't stop giving!

There's something very satisfying about using a spoke wrench to take the wobble out of a wheel. I'm still not very good at getting a wheel perfectly round though, and I only re-dished wheels a couple of times.

What is your background in cycling? And on wrenching on bikes?

In junior high, I biked to school on a Pep Boys Hercules "English Racer" 3-speed. In my freshman dorm in college, I fell in with friends who were enthusiastic cyclists and got me started bike touring. We rode from Palo Alto to Seal Beach one summer, and from Seal Beach to Tijuana and back another summer. I did some mountain biking a long time ago but haven't been for a few decades.

I bought a copy of Jobst Brandt's "The Bicycle Wheel" my freshman year and built a pair of wheels following its principles. I've done most of my own bike upkeep since the ACTC got me to volunteer for Turning Wheels for Kids' annual Big Bike Build. I've been a team captain and team wrench for the Western Wheelers for several years, until the pandemic.

What can you share about your personal or family bike collection?

I currently have 5 bikes. The bike I ride regularly is a 2003 Colnago CT-1 with a Titanium main triangle, carbon stays and fork, dressed with Campagnolo components. I have a 1991 Stumpjumper with semi-slick tires that I'm using as a sort of gravel bike, since I gave up mountain biking many years ago.

Pre-pandemic I came to SVBE on my 3-speed Brompton folder, which I've ridden from the Embarcadero in SF over the GG Bridge to Sausalito. Hanging unused on a rack are my custom steel Steve Rex road bike with S&S Bicycle Torque Couplers and my Bike Friday Air Friday.

What have you learned since volunteering with SVBE?

The astonishing number of different brake and seatpost designs people have come up with—some of them are appallingly awful.

Or most interesting problem to deal with?

The first time I had to replace a twist-shifter cable, I had no idea how to get to the innards until Dave Fork pointed out the secret slot to push a screwdriver blade into to pop the cover off.

It’s been a lot less than before the pandemic lockdown, for sure. I used to ride three to five times a week, especially the Western Wheelers’ “Hills R Us” Wednesday ride, which was all about doing the local climbs. I’m currently down to about two-ish rides weekly, mostly variations on the Western Wheelers Monday coffee rides and Tuesday Portola Loop rides. I generally do them in the reverse of the normal direction, as there are still Wheelers riding them as non-club rides, and I don’t want to end up in the wake of a pack of riders.

What’s your favorite bike ride, local or not?

One of the most magical was in Italy's Lazio region, to Civita di Bagnoregio. It's a semi-ghost town on a volcanic cliff, accessible only to pedestrians and cyclists via a soaring stone ramp over a chasm. Pedestrians applauded us as we rode up the ramp, and in town we happened to find a charming old couple who showed us how they still made olive oil in traditional presses. 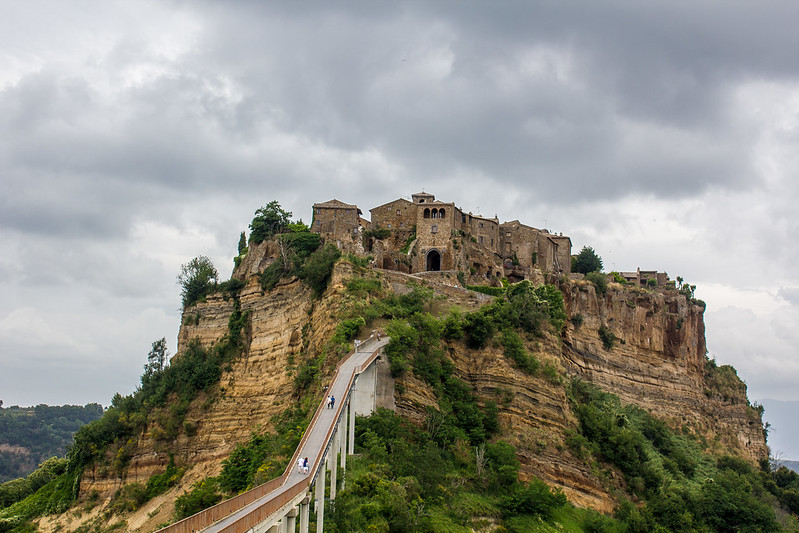 How did you end up starting a touring company?

I first worked with an existing company I’d been a customer of. It was a 1-woman operation by an American ex-pat living in Italy. She used to get help from her husband when he wasn’t at work, but they separated and she was looking for help. I’d built her website for her in exchange for tutoring with my Italian, and she knew I’d been thinking about taking a break from high tech to try leading tours. The timing just worked out with the dot-com bust.

After a few years, during which I learned how to conduct business in Italy, it became apparent that we weren't earning enough for both of us. Since the business was based where she lived, I bowed out, then subsequently began my own tours in a different part of Italy, where we wouldn’t be in competition. I thought the Piedmont region deserved to be as well known for cycling as it was for wine and gourmet food, and across the border in France the Rhone-Alpes also was a great place to bike that didn’t seem to be on the radar of English-speaking cyclists. In addition, I did specials where we followed a few stages of the Giro or the Tour de France in the mountains, as well as custom tours at the request of repeat customers.

How can someone learn more about your tours?

I had long planned to retire at the end of 2021 but the pandemic has accelerated the timeline since it’s unlikely I’ll be able to travel to Europe before late 2021. I’ve closed down the business, but the website is still up, down to a home page showing a selection of photos from my tours. Anyone interested in scenes of biking in northern Italy and southeastern France is welcome to visit agile-compass.com. It’ll be online until the middle of 2021, when the domain name registration expires. I don’t intend to renew it.

Thanks Michael for helping power SVBE during these challenging times!

If you're reading this and have some bike mechanic skills and would like to help us donate bikes to those in need of transportation, This email address is being protected from spambots. You need JavaScript enabled to view it. and tell us about your current skills and tools.

Learn more about the superstars who keep SVBE rolling through our previous featured volunteer spotlights!

Volunteer days are back, in a new format! They're the second and fourth Saturdays, on a smaller scale. See our Eventbrite site at bikex.eventbrite.com for details and to RSVP. Grab your spot and join in on the wrenching for good! See the event calendar for more events and volunteer days.

Donate bicycles and parts by appointment. This email address is being protected from spambots. You need JavaScript enabled to view it. and details of what you have. We have specific drop-off times on Wednesday and Friday and other times by special arrangement. We'll let you know if we have a need for your items and get you drop-off details.

Info: This email address is being protected from spambots. You need JavaScript enabled to view it.

Info: This email address is being protected from spambots. You need JavaScript enabled to view it. or scbe.bikex.org.

How to buy a bike from us.